My grandparents Johann and Christina Strickert came from the Mecklenburg area in Germany about 1860 settling in Perth county, Ontario, Canada.  They had five sons: Karl, Friedrich, William, Johann, Christian, and one daughter Minna.

The second son, Friedrich, during his first marraige, fathered two sons and two daughters, Herman, John, Anna, and Minna.  Upon having another child, both mother and child died.

While living in Canada, Friedrich remarried and to this union six children were born: Mary, Henry, Tillie, Myself, George, and Gusta.   I was born in Perth county, Ontario on July 11, 1889.  Christina, my grandmother died in 1891 and at that time my grandfather, Johann, came to live with my father, Friedrich, and his wife Catherine, my mother.

He moved to the Scott City area early in 1893 and located five miles east and five miles south of town.  There he provided living quarters by purchasing a two story granary in Scott City where at that time vacant buildings were plentiful and cheap.  The living quarters were two rooms in the upstairs.  My mother and I arrived in Scott City April 12, 1893.  I was only four years old but can remember how important I felt when we first came on the Missouri Pacific train into Scott City.

Much to our disappointment, we raised a very meager crop in 1893.  What food we raised was so short, about 19 inches high, we had to cut it with a butcher knife.  Our house was built in 1896 with lumber purchased in Scott City.  In this house two more sons were, Oscar and Edgar, were born.

We had church services in the Buffalo school beginning in 1893.  A Lutheran pastor came from Albert, Kansas on the train once a month for services.  A member of the congregation met him and took him back.

The school term lasted three months with the teacher receiving $25 a month salary.

deep.  When the snow melted in the spring all the lagoons were full of water

and black with ducks.  Those were the first ducks I shot and I got twenty in

feet deep was made in the driveway of the barn in 1913.  I got a motorcycle

in 1913.  I made it into Scott City in nine minutes, ten and a half miles as you

follow the road, but closer across country.  In 1918 the snow was drifted

Scott City.  I built my house in 1916, married Caroline Stanke in the spring

of 1916 and moved in August of the same year.  We had two children, 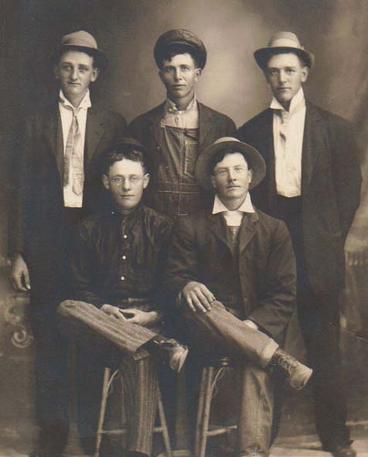