When Frank Earl was 5 1/2 years of age he was enrolled as a scholar in the Charles Sumner Public School, situated at the eastern end of Flournoy Street and on 43rd Street. (The name of the school being in honor of Mr. Sumner who was a senator for the State of Illinois and representing the State of Illinois as one of the State's Senate Member.)

Frank was much interested in horses and often went to the near-by brick yard to go with the drivers to deliver brick and other building material. When the Brick yard was under fire from the spark's of a passing Belt Line Railroad engine, there was a huge fire that resulted in the lath storage area. When the fire department arrived, with much effort, the fire was extinquished; and shortly afterwards the yard was declared open to any of the 69 residents near-by to take away any amount of partially destroyed laths. With a hand wagon, a goodly amount of the residue was hauled by Frank, William and Walter to their home and much of the laths salvaged were used to lath the walls and ceiling of the extension erected by father. The addition was prepared in the basement of the home in sections. As it was in violation of the City's By-Law to add anything of frame construction, father arranged to have a number of fellow workers to arrive very early one morning and carry out the sections and join then together, This was done but some neighbor informed the authorities and in mid morning, a police-man arrived to check matters. However, it was known that when once erected nothing could be done, so the addition of a bathroom and a storage room was added without any further investigation.

Mother decided to have a birth anniversary party for Frank on Dec. 30th, 1903, and had invited a number of folks to attend. It was on this date that the horrible Iroquois Theatre tragic fire occurred.

There were 571 persons who met their final hour in the theatre, and it was only in having the party for Frank that our friends - the Todd family were restrained from attending to see the play "Bluebeard". Harvery Todd, one of the sons wanted to get tickets for the family but Mrs. Todd said he should not do so for they were to attend the party. In the names of the deceased persons, there were included the wife and three children of the janitor of the Sumner School, Mrs. Holtd and girls. The evening papers depicted the terrible scene in the building as remebered by many who did survive. When the asbestos curtain could not be lowered, the people were told to remain seated but the fire got out of control and raged on and over the heads of the partrons. Many of the outlets were locked at the time and bodies were piled in heaps at the doors.

A chum we had, was one, Arthur Tuttle. Art's father was a worthy jeweler. Art had a brother, Walter. On Saturday morning Art, Frank, Bill and I, Walter, would go on a scouting trip - roaming along the alleys to find saleable scrap that had been discarded. Once a week a collector would travel along the alleys and purchase from us whatever we had gathered - old rags - bottles - scrap iron, brass, copper, etc.

For a time, we were allowed a weekly allowance of 15 cents and once we decided to run away from home and we started out. But when leaving we thought we should have some smoking material and we bought pipes, some matches and some Fashion tobacco. We went a short distance toward the school, stopped to smoke, piped up but did not succeed in getting any pipe burning; glanced up the alley where we were and saw Art's brother Walter, got frightened and ditched all of the smoking things along side a telephone pole and beat it back home as fast as we could. Arriving mother knew there was something wrong about us, and kept questioning until she wanted to see our weekly allowance. We all had the same excuse - a hole in our pockets. So she told us to expect the worst of a licking when dad got home. Yes, he arrived and when told what we had been doing, instead of a thrashing, he ordered us to go back and pick up the things (Fashion was the brand of tobacco he always used.) When we got back, there was nothing left for someone else had found it all.

Once when out to Hanna, Indiana for the summer vacation, Cousin Earl Marquardt dared Frank to throw some of the fallen apples in the orchard against the clustered bees around the hives entrance. Frank did so and aroused the bees. Cousin Earl hastily beat it for the house and left us to suffer a number of stings.

Out at Lecrosse, Indiana, lived Uncle Theodore and Aunt Lucy. Every time we went there, we narrowly left without a scrap with our two boy cousins. But we did learn to snitch a lot of the candy out of the box in Uncle Theodore's grocery store.

There was a real estate broker who lived two doors to the east. To travel about he maintained a horse, and he offered Frank a weekly allowance to look after it. Mr Salter was a very kind friend.

Moving to Canada in May, 1909, it was hard to leave Chicago. During the time on the Saskatchewan Homestead, Frank always did care for the horses in particular. And he did assume to do the heavier work like lifting the heavier stones when stone picking, getting the heavier green fuel wood poles, and other like work.

There was once he pulled a near troublesome boner. When Uncle Louis was out west from Mitchell, Ontario, Frank inserted a 22 calibre bullet in Uncle Louie's pipe. Fortunately, in some way, Uncle did find it before he started to smoke.

In the fall of 1917, there was a tribunal set up in Strasbourg for the purpose of granting or denying regarding military service in the Canadian forces. Mr. Cockrane was the head official. In some way he did grant exemption to both Frank and to me, Walter, owing to the fact the 1916 wheat production on our farm lands did average 25 1/2 bus. per acre. However in May, 1918, both Frank and I were called for service. I entered in Regina on May 25th, and Frank on May 28th. Trained for a time in Regina, and were put on overseas draft, and entrained in July. The night we left Regina, the 1918 crops were severly damaged by frost. Went overseas, during August on the ship "Casandra", which had formerly been a cattle transport. We were assigned to the submarine firing squad to keep on the lookout for "subs" - but none was ever sighted.

In camp in Bramshott, Hampshire, there was the serious world out-break of the "Flu" and it hit the camp with many soldiers being sick. Frank among them, after I had been entered at the military hospital. Frank while lying on his bed could see the bodies of the soldiers who had passed away, being tossed by two husky soldiers, into a transport and he was so worried he told me later wondering if I should been been one. He was so happy, when he was able to visit me at the hospital.

When on a leave in England we both went to Wolverhampton, stayed a few days, then left for London. We returned to Canada in June, 1919 on the steamship Aquitania."

A note written on the edge of the editoral of Frank Strickert:
"In London - arriving evening - searched for home Victor Gruchy Sr's sister - Mrs. Airey and husband - found it - in a large mansion with her husband and we stayed of night - next morn - on depature for camp gave one of their boys a pound note for him to buy stamps."

Later, the family of Fred and Hulda, composed of Walter, born April 5th, 1895, William Marq, born on April 17th, 1898, Frank, born December 30 1896, and sister Gertrude, born on May 11th -1904 or 1905- and who succumbed on the following Feb. 1st, when 9 mos. old of Bronchitis and Memebraneous Croup. By order of the City's Health Department interment was ordered to be made the same day and the room in which she perished was ordered to be placed under strict quarantine.  At the time of her passing, the family was then living at 2295 West Jackson Boulevard, in a frame dwelling that had been purchased from the former owner, Paul Dasso. 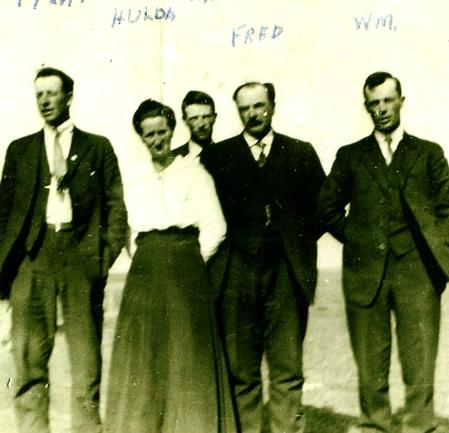 of Frederich Charles Strickert, the son of Johann Christian

Regarding the life of Frank Earl Strickert - written by his

"A report of Frank is that his birth date was on December,

of his parent's Frederick Charles and Hulda (nee Marquardt)

Strickert, at 4747 West Harvard St., in the West area of the 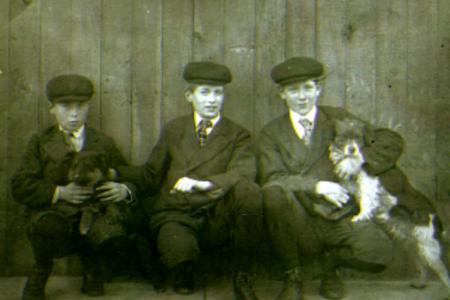