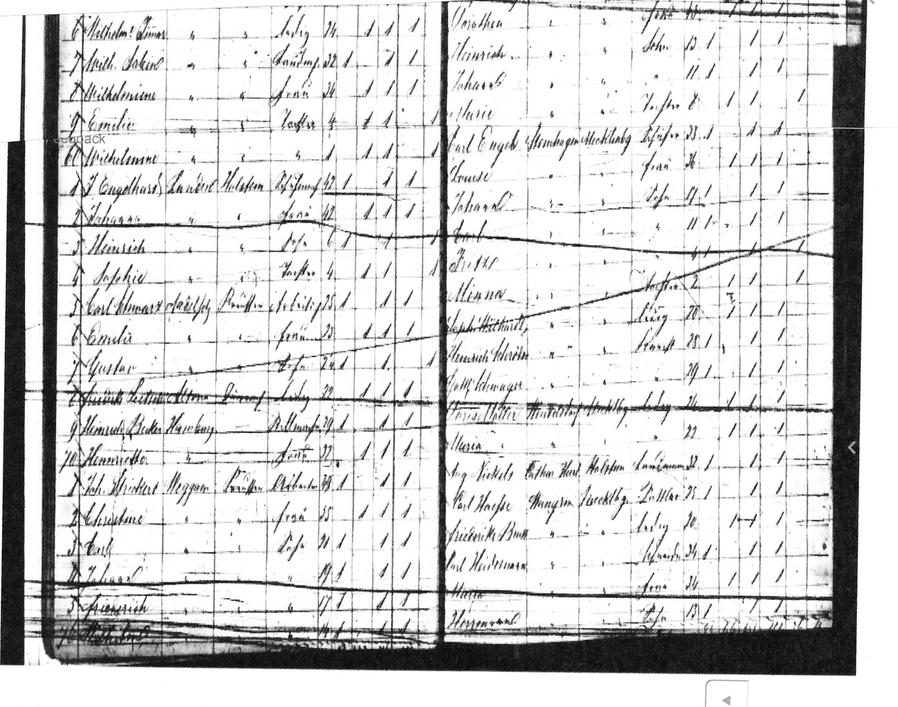 Johann & Christina (Feuerak) Strickert journey across the Atlantic to Canada

The names of Johann Strickert family (seven persons) are listed on page 42 of the Ship Register (Verzeichniss) for the Sailing Vessel (Segelschiff) Washington in April 1856 from Hamburg to Quebec.

Their names occur in the very bottom of the left hand column on the document below:

Note that Johann is identified as six years younger than his wife Christina, or with a birth date of about 1806, differing from the family tradition dating both their births to 1801.

The family is identified as coming from the town of Weggun in Prussia (not Mecklenburg--as mentioned in family tradition).  Johann is described as an Arbeiter or a workman.

The scheduled date of departure was April 1, 1856.  Earlier on March 7, Johann registered in Boitzenberg for a German exit permit for seven persons.  Easter came early in 1856 on March 23.  According to an old custom, confirmations took place on Palm Sunday, or March 16.  This is consistent with the record of son Wilhelm's confirmation at the Evangelische Kirche in Weggun, before their departure.

This document appears in the Hamburg Archives for Auswandererlisten (departure lists) 373-7 I, VIII A 1 Band 009.

At the top of the document, the ship name Washington is written by hand, as is also the name of the captain Henry Platz.

The Washington is included in the online Palmer List of Merchant Vessels.  This ship was constructed by William Naizby in 1852 in Sunderland, a northern port city of England, and a leading ship-building center.

It was 124 feet 8 inches long, 26 feet 6 inches wide, and 19 feet 8 inches to the depth of its hold.  It could carry 178 passengers.  The Hamburg shipping firm of Robert Miles Sloman purchased the ship in 1852 until selling it in 1972.  During those 21 years, the Washington made 35 round-trip transatlantic voyages.  Henry Platz served as captain from 1856 to 1861.  So this was his first Washington voyage.

Wilhelmina Strickert Hoppenrath, the oldest of the Strickert children had married in 1853 and had begun raising a family when her parents and five brothers left Germany in 1856.  On June 4, 1862, Wilhelmina, along with her husband, Carl (though here listed by first name Wilhelm) Hoppenrath, and now four children (including a son just 19 months old), left Germany for North America.

Their names are listed on the very top of the right column of the document below (page 345).


This document appears in the Hamburg Archives for Auswandererlisten (departure lists) 373-7 I, VIII A 1 Band 016

The Goethe was guided by Captain Mueller.  While it departed from Hamburg it sailed not to Quebec but to New York.  From there the Hoppenraths traveled to Chicago where they settled. 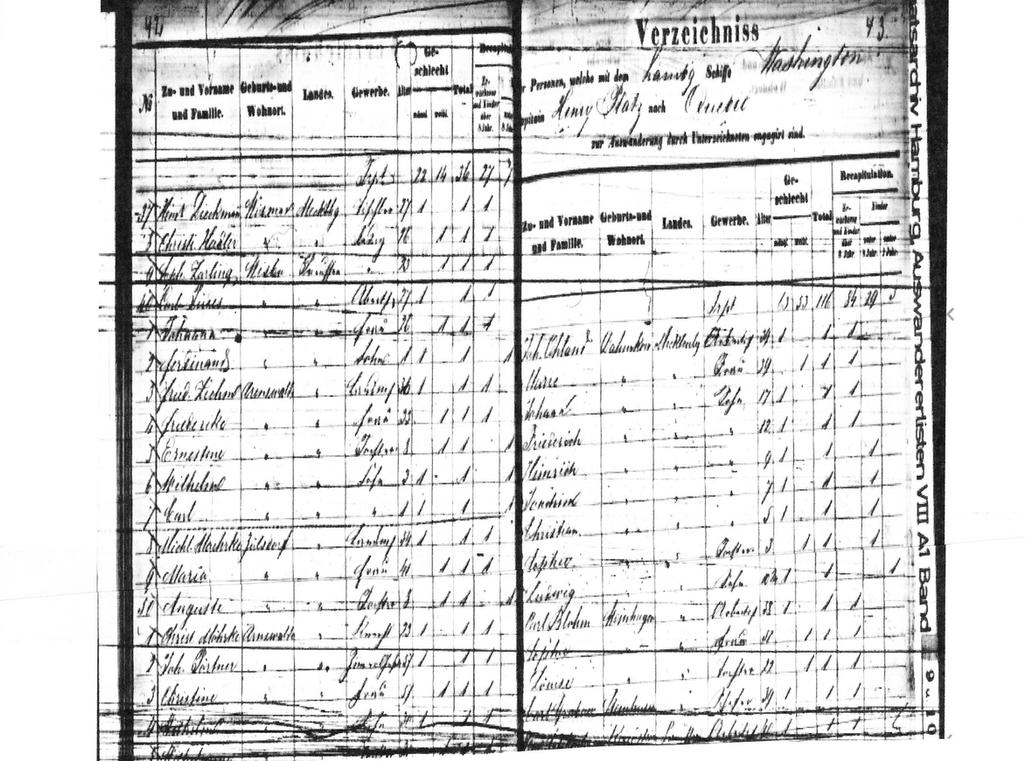