Grandmother was a frail little woman and like a child as long as I can remember.  Mary (my older sister)  and I would go there each week and take them bread and other things that mother baked for them--as well as clean laundry that Mother did for them.  Grandfather had about a block of land with a path through the center.  He would plant wheat on one side and potatoes, onions and tobacco on the other side; reversing the plantings each year.  He spaded and worked the ground by hand.  When the wheat was ripe, he cut it with a scythe, tied it in bundles and shocked it.  Then later he threshed it with a flail (a heavy piece of wood with a handle attached).

My grandparents loved flowers.  There was a large purple lilac on either side of the gate, and another by the door and lovely pink climbing roses by the window.  Also there were some bluebells.  The house was just one large room with one window and door.  It had an attic where Grandfather cured his tobacco.  He liked to smoke his long pipe that reached to the floor.

Sometimes when I went over there, Grandfather would be preparing their meal.  It was a real treat to stay and eat with them.  I always thought he made the best mashed potatoes.  He would make a big mound on a large plate and make a hole in the center into which he poured a sauce made with bacon and onions.  Then we would all sit around the small table--each had a spoon and would dip up some potatoes--then dip the spoon into the sauce and eat it.  They tasted so good and it just occurs to me that there were no extra dishes to wash.

Grandfather kept his Bible and prayer books on the side of the table and always read several passages and prayers before we ate--perhaps that was why things tasted so good!

Grandmother's mind always wandered to her childhood.  Sometimes she would sing little songs or tell stories of her childhood.  The night before she died, mother sent me (9 years old) to take some things to them.  I could hear her breathing heavily before I got to the door.  When I got inside, grandfather took me to the bed and pulled the sheet back so I could see her and told me grandmother would not be with us much longer.  I ran home and told mother.

It was almost dark or dusk as we had long twilight evenings.  Father walked down at once.  Grandmother breathed her last the next morning at the same hour that my brother, George, was born, September 9, 1891.

I was nine years of age.

Laater Grandfather came to live with us and came to Kansas with us at the age of 91.  He was almost 94 years of age at the time of his death.

Little George developed pneumonia soon after we arrived here and died in mother's arms on the way to town to see a doctor.

After we arrived in Scott City, we lived with my half-sister Anna Wilken and husband and two little sons.  Their house was small, but we managed until they could build a temporary house on the land that father bought.  We lived in this house until 1896 when  the house that still is on the farm was built.

Oscar was born in the new house and lived there until his death.

Notes:
Johann (1801-1895) and Christina (1801-1891) Strickert.
They were married 27 January, 1927.
A note in my father's papers suggested that the photo was taken on their Jubilee wedding annivesary.
From appearances it may be even later in their life.
Note Johann's floor-length tobacco pipe.

by Tillie Mahler  (Matilda Strickert, 1881-1976, daughter of Frederich Strickert and

Our grandfather and grandmother Strickert lived about 3/4 mile west of us (in Logan Township, Perth County, Ontario) in a little log house on the corner of the farm that he had turned over to his youngest son, Christian, who was supposed to take care of his parents.  He failed to do this and my parents (Frederick and Caroline/ Catherine) took over the responsibility. 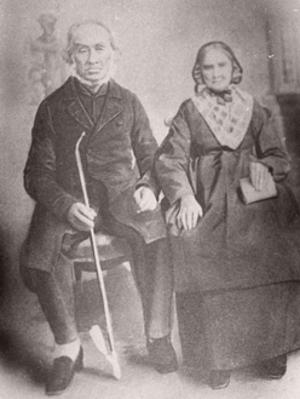